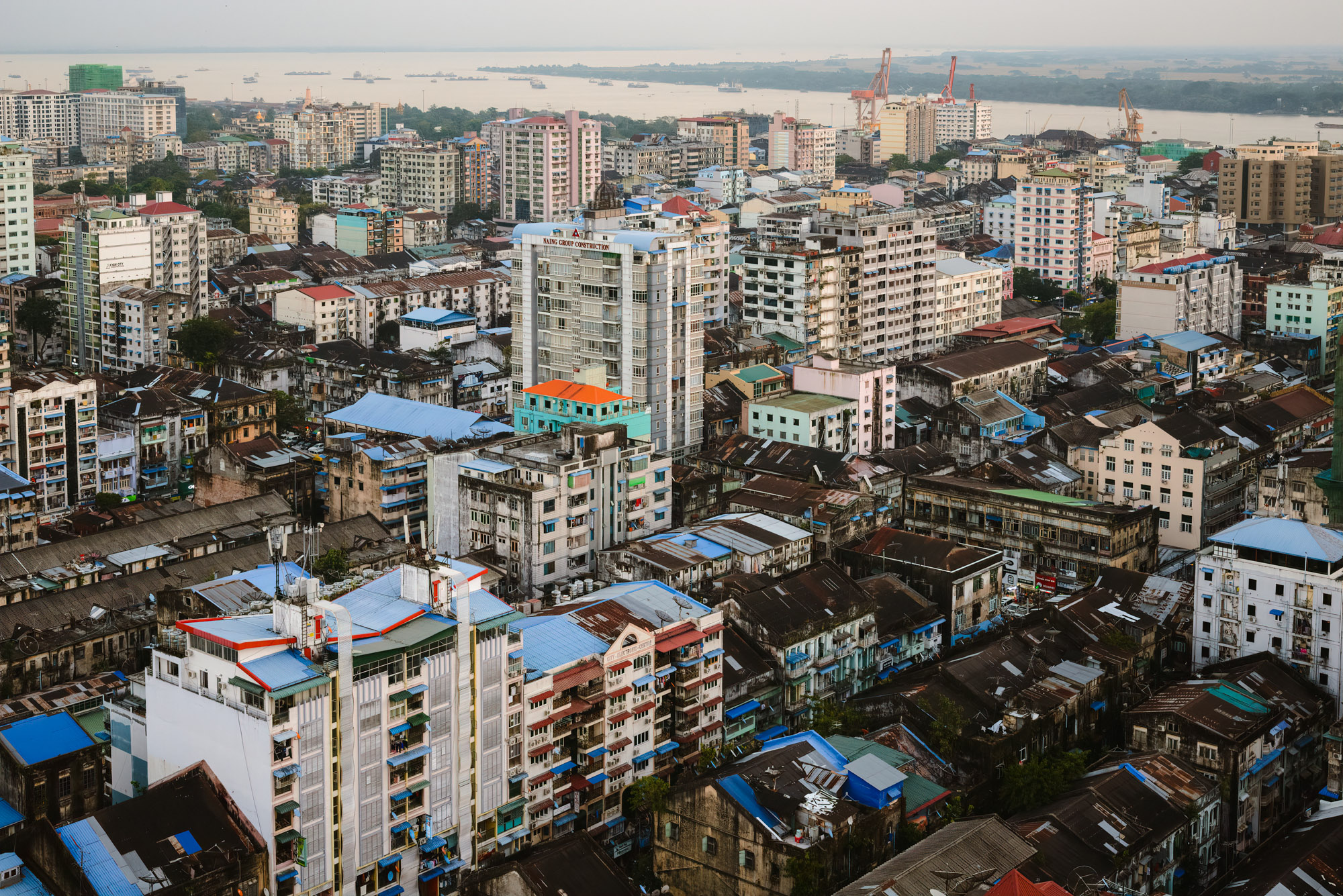 “The sun never sets on the British Empire.” – John Wilson (amongst others)

“All things that have form eventually decay.” – Masashi Kishimoto

Most visitors stay in Yangon only for a day or two. Usually, to visit the spectacular and glittering Shwedagon Paya (pagoda) before moving elsewhere. Such a fleeting visit to Yangon is a pity as there is much to see. Rangoon (the name for the former capital city), offers a lot for curious travellers, historians and photographers alike.

A Tale of Two Cities

Some photographers have claimed Rangoon to be the “new Cuba” or “new Havana” for street photography.

Myanmar: the new Cuba for photographers

For photographers, candid street scenes with textured, vibrant coloured backdrops make for compelling images. Both Myanmar and Cuba remain in time capsules due to past isolationist government regimes and international sanctions.

Myanmar opened its doors to the world in the twenty-first century with a partial move towards democracy and a desire for economic improvement. However, at the time of writing, history seems to be repeating. A coup d’état has taken place with the Burmese military ousting the government of Ms Aung Sang Suu Kyi. On the other hand, Chinese media outlets underplay recent events as  “a major cabinet reshuffle”. It would appear old military habits die hard and the return of international sanctions to Myanmar loom. Hopefully, this is a temporary situation with a rapid resolution and positive outcome.

A walk along Rangoon’s old city streets near the delta river reveals a rich, layered, textured history. A large global port of the British empire, peaking in the 1920s and ’30s, followed by a rapid decline from the 1950’s onward.

Pansodan Street is famous for booksellers – copied and bound books neatly piled on the sidewalks by local entrepreneurs for perusal. An excellent place to buy a copy of George Orwell’s Burma Days. Street clerks in front of the old Accountant General’s Office on the corner of Pansodan and Strand Roads still ply their trade. The clerks still use clunky old antique typewriters, hewn from heavy metal, producing reams of legal paperwork. Digital technology has not reached the bureaucrats of Myanmar. As a result, these street scenes still provide glimpses of Orwell’s Burma of the 1920s. 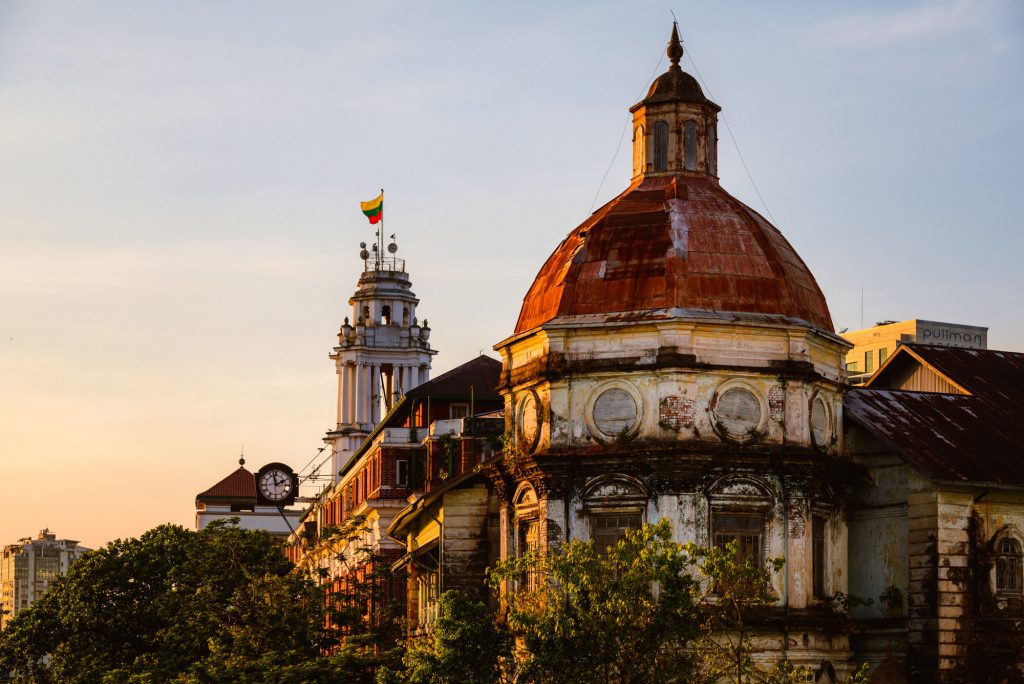 Former Accountant General’s Office on the corner of Strand and Pansodan Roads, Yangon. The sun sets on this beautiful decaying colonial-era building where time stands still. Time has stood still even for the old broken clock. 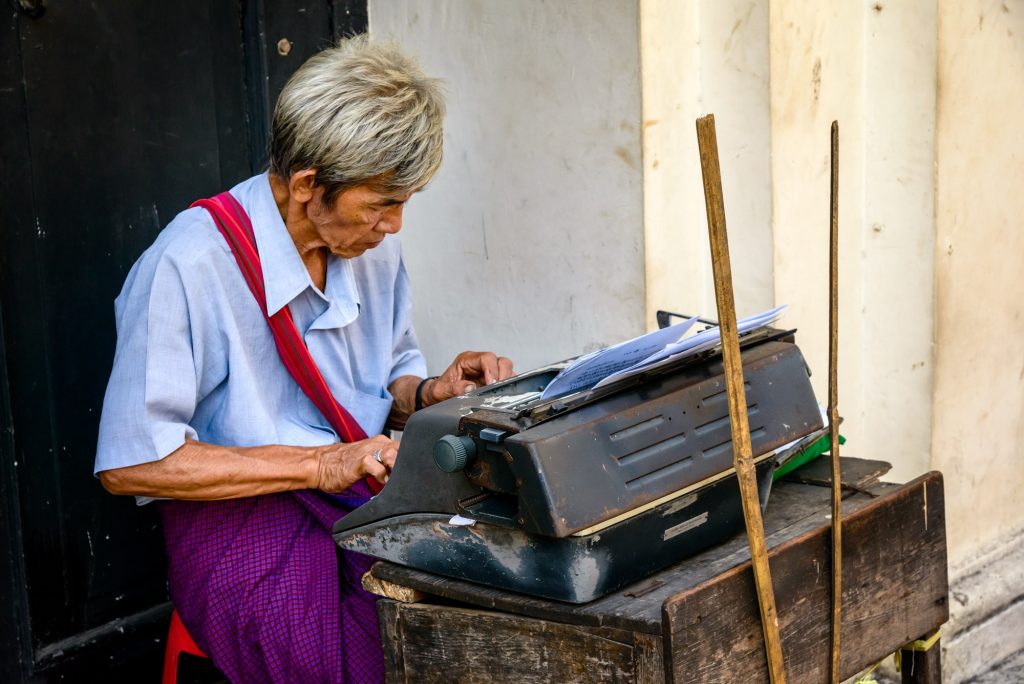 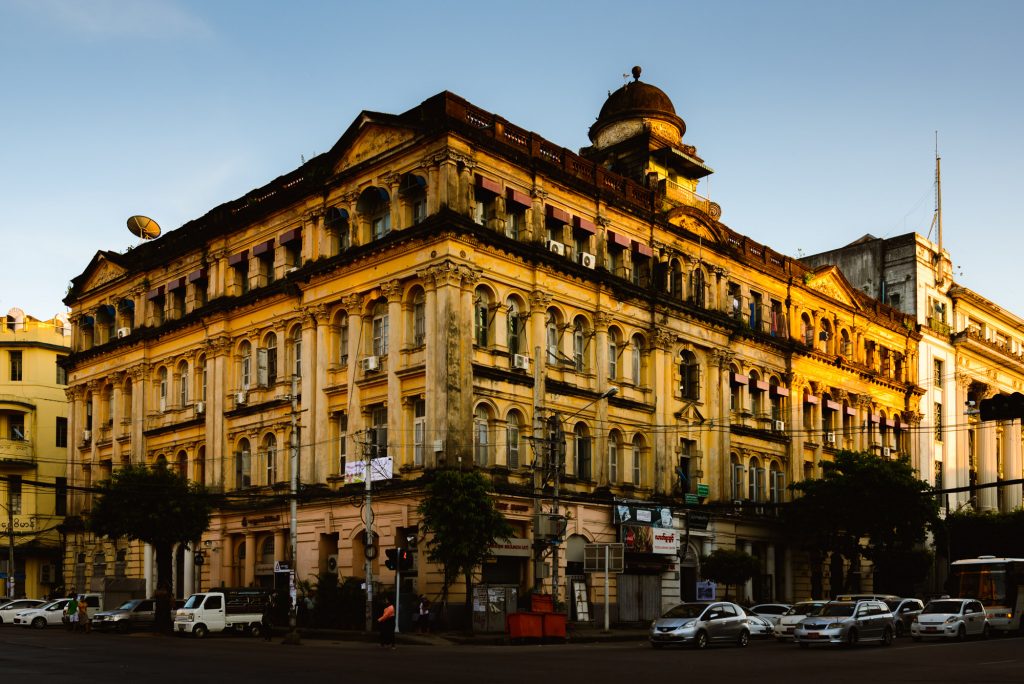 British colonial heritage building (now the Lokanat Art Gallery), Yangon. Sofaer’s Building, corner of Merchant and Pansodan Streets. Designed by Isaac Sofaer, a Jewish immigrant from Baghdad, this was a luxury emporium in the early 1900’s

‘Elegant decay” is the feel and sense when walking the streets of Rangoon. Grand old buildings slowly deteriorating in the humid, tropical climate, lashed by the monsoon rains. Decay eating into the textured, multi-coloured, peeling exteriors.

The Japanese term “wabi-sabi” seems appropriate for Rangoon. Simply defined “wabi-sabi” is a state of acceptance of the imperfections in life’s flow and appreciating them as beautiful.

The scene changes as one enters grids of small narrow backstreets branching from the colonial promenades – Streets with crowded tenements, bustling shops, eateries, and wet markets.

Men wear traditional longyi (skirts) – pieces of colourful cloth wrapped around their legs, secured at the waist in a standard knot. People smear their faces with a yellow-white paste – a national beauty product derived from the bark and branches of the Thanaka tree. The thanaka paste protects, moisturises and preserves skin from the harsh tropical sunlight. The ghostly white thanaka facemasks contrast starkly with blood-red stained teeth and lips – derived from the national habit of chewing the mildly narcotic betel nut. Despite the startling facial appearances, people’s smiles are genuine and welcoming. 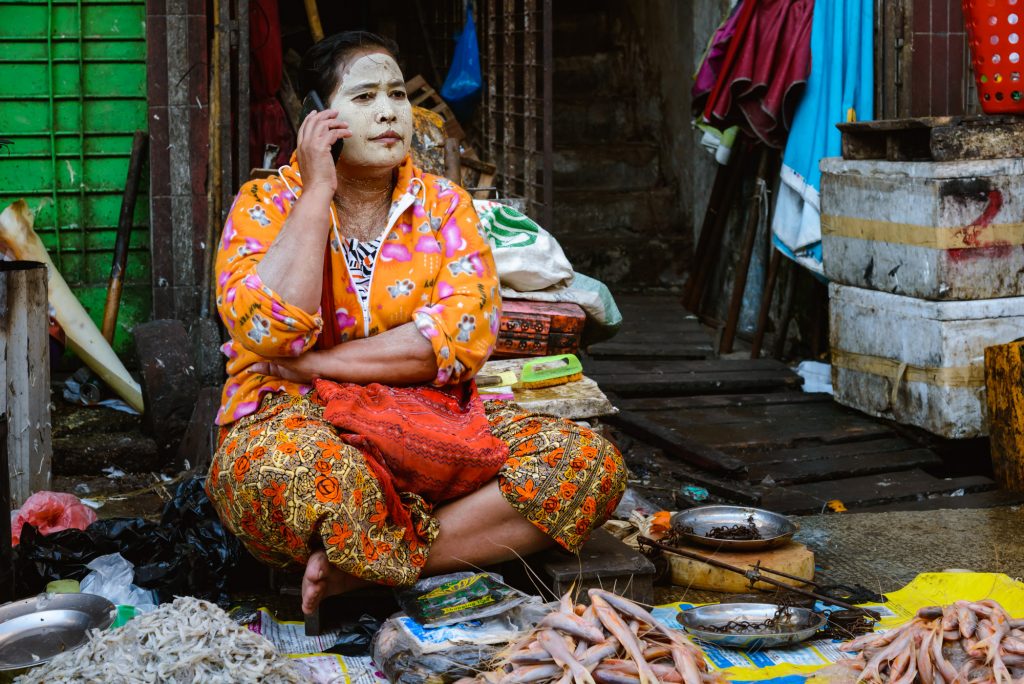 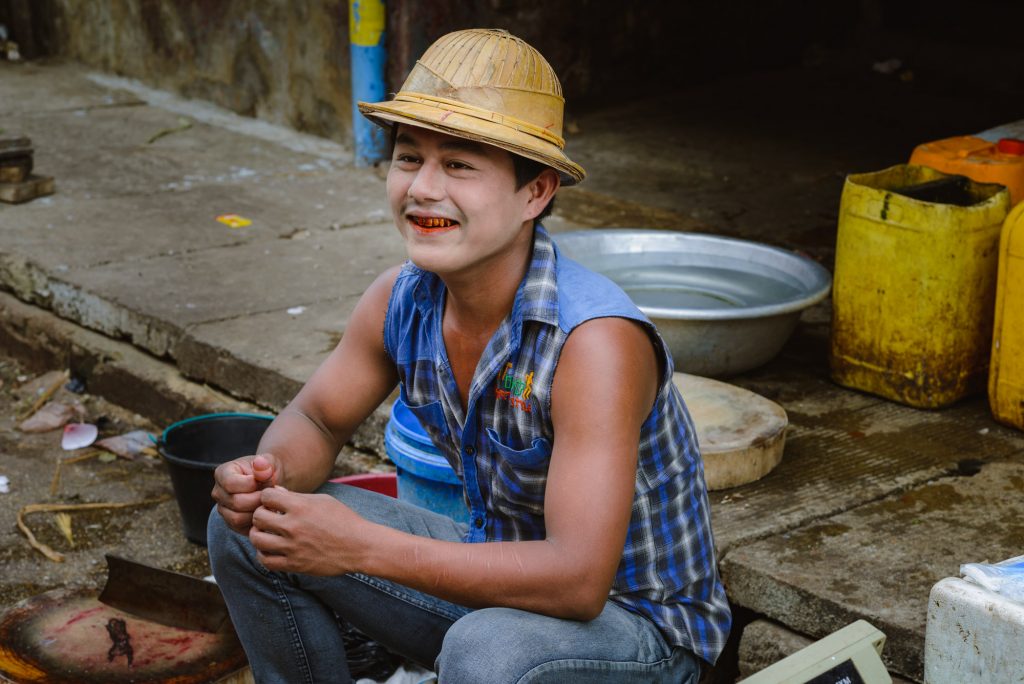 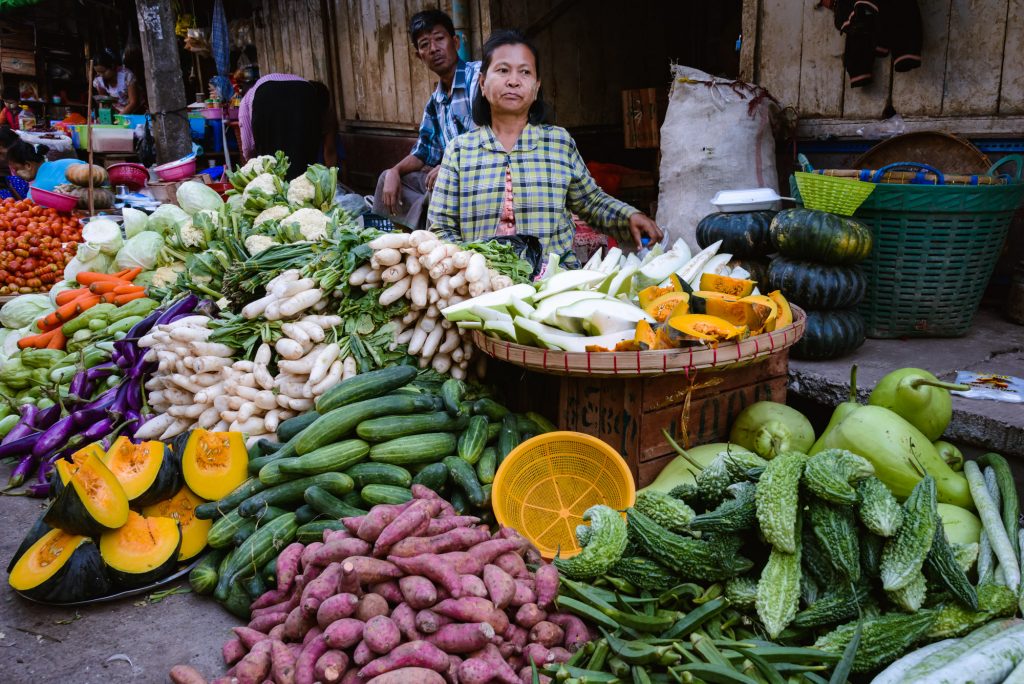 Vegetable stall and sellers at the fresh food market on 26th Street, Yangon.

The people of Rangoon derive from dominantly Buddhist Burmese to European and British colonial influences. Rangoon attracted people from all corners of the former vast empire and commonwealth. Therefore, there are descendants of Indian, Tamil, Bengali, Chinese, and Middle Eastern traders. Often living in separate sections or separate streets, keeping their own distinct cultures, religions, and cuisine – yet still fused in this crowded thriving city.

Buddhist temples, churches, mosques, and Hindu temples reflect the religious diversity. On 26th Street, there is a solitary and well-maintained synagogue within the Indian Muslim community, a symbol of religious and cultural tolerance in the society. People go about their day-to-day business, carving out a living, just as they always have. 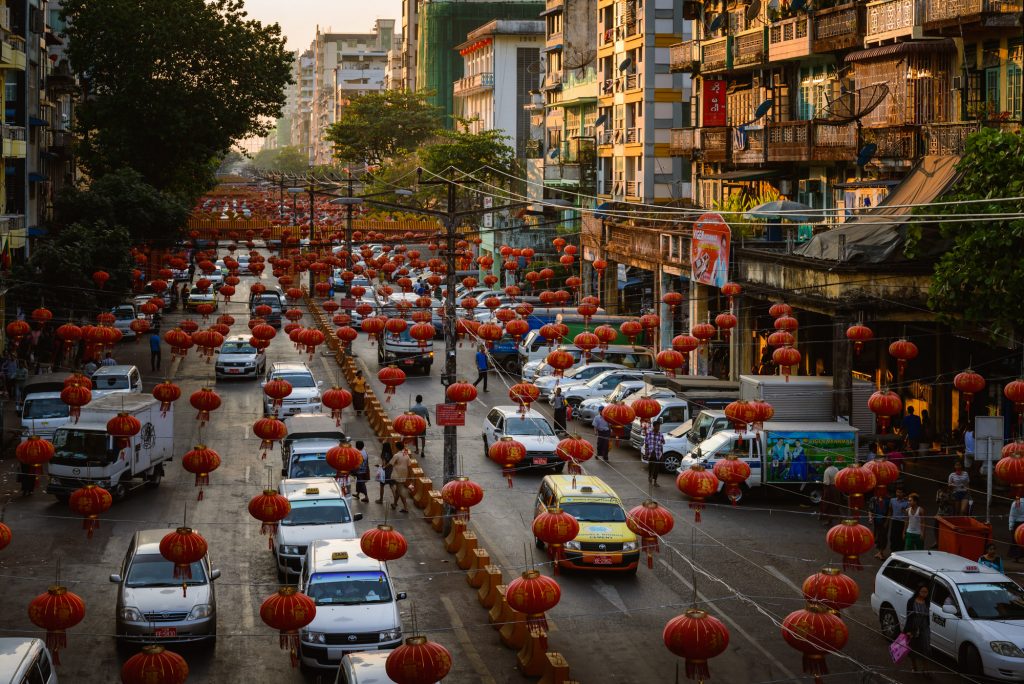 The traditional Myanmar “tea shop culture” still thrives – tea shops have always been meeting places to discuss business and socialise. The tea shops lining the narrow streets serve complimentary green tea as a sign of friendship, and modest prices for sweet coffee and the many delicious snacks. 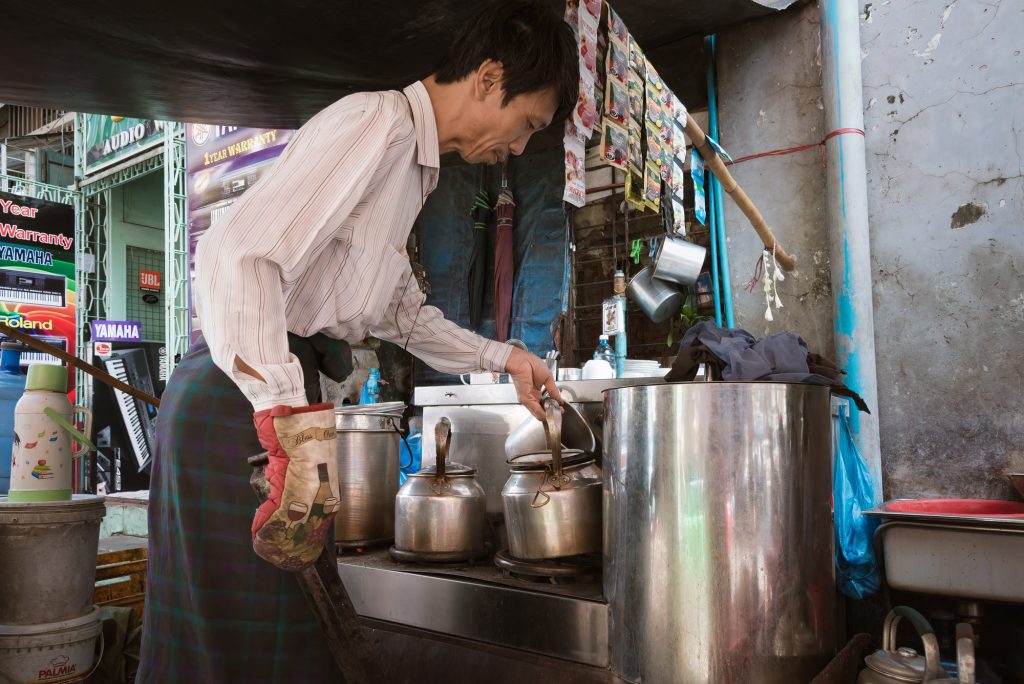 Street Tea shop owner, downtown Yangon. Many such tea and shops line the backstreets around 34th and 35th Streets behind city Hall. Green tea is generally complimentary and coffee and snacks are served for a small price in these open air rendez vous meeting places. 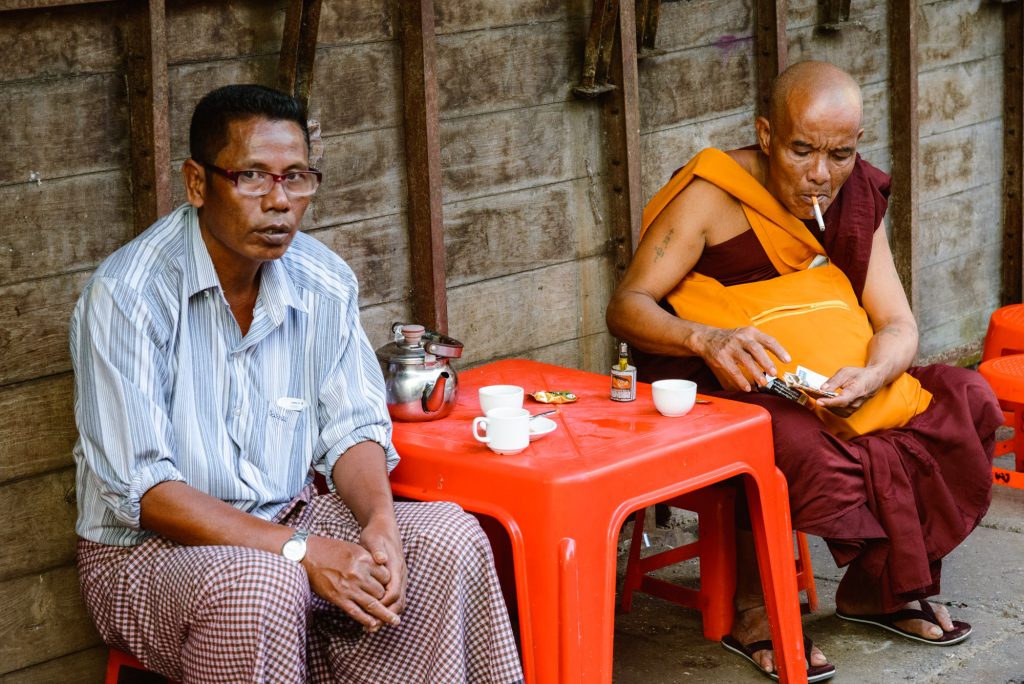 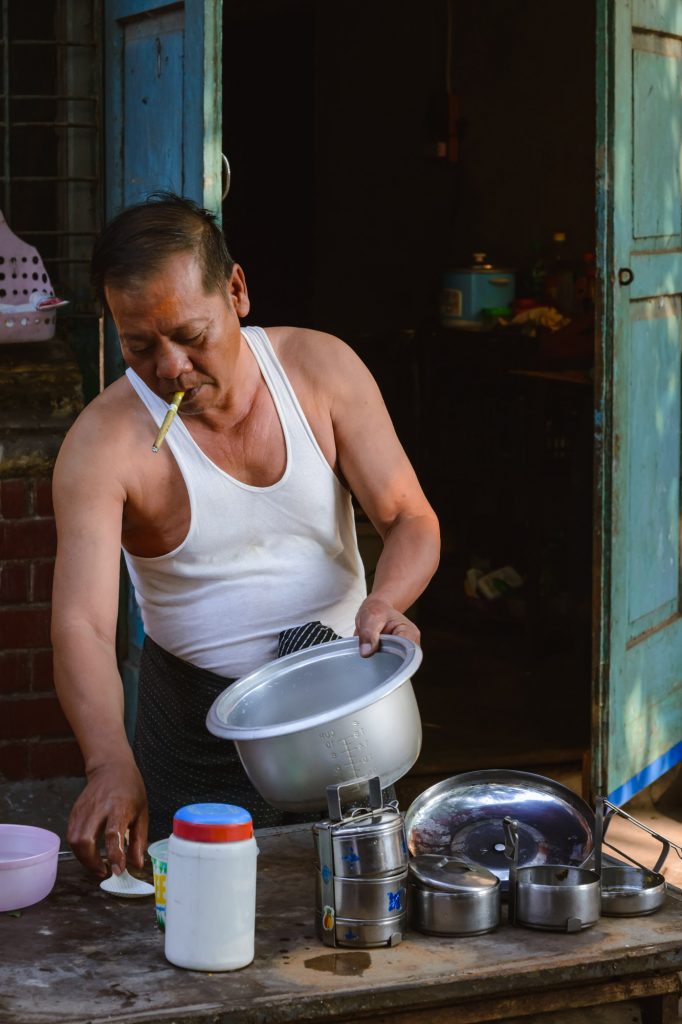 Present-day Yangon: A city in transition

Yangon is now in transition as it moves into a new era. The city is undergoing a massive resurgence, with rapid modernisation from international investment. Smartphones, a rare sight some ten years ago, are commonplace – affordable imports flooding in from neighbours, China. Myanmar is entering the digital age.

In the future, the challenge will be to preserve and maintain heritage buildings as modern renovations, and new building expands. As a result of current changes, it is not difficult to envisage parts of this city eventually resembling its wealthy Asian counterpart, Singapore. For now, this has not happened. A window of opportunity exists to explore and photograph this historic port city – before modernisation and the digital revolution impacts past lifestyles. 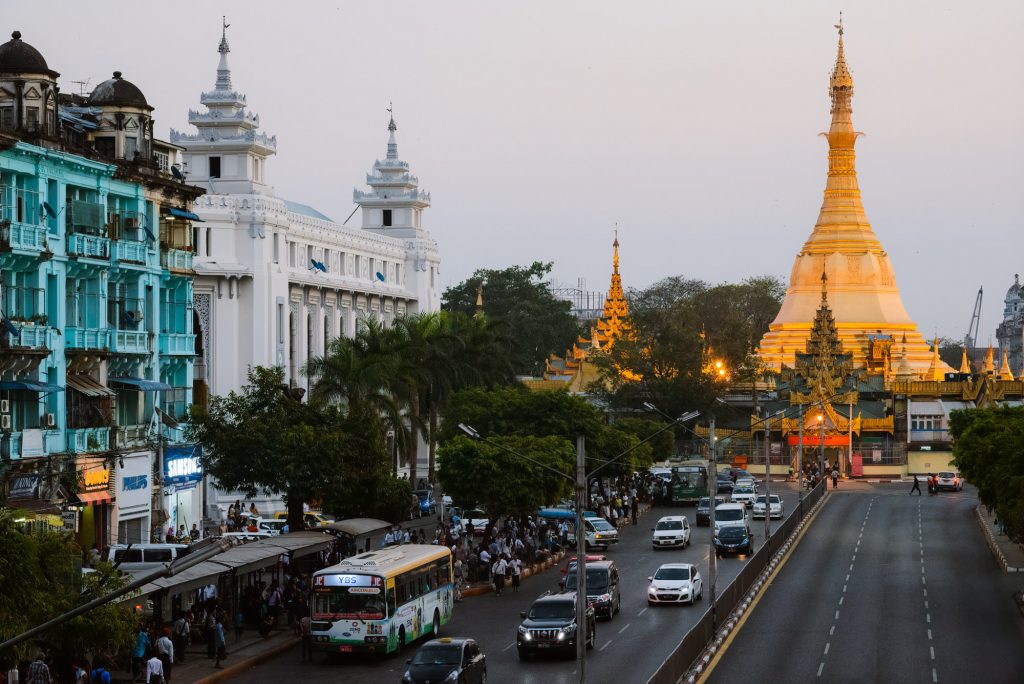 Evening rush hour on Sule Pagoda Road, Yangon. Old British colonial buildings with Burmese and Asian influences flank the road leading to the golden stupa of Sule Paya situated in the middle of a traffic roundabout.