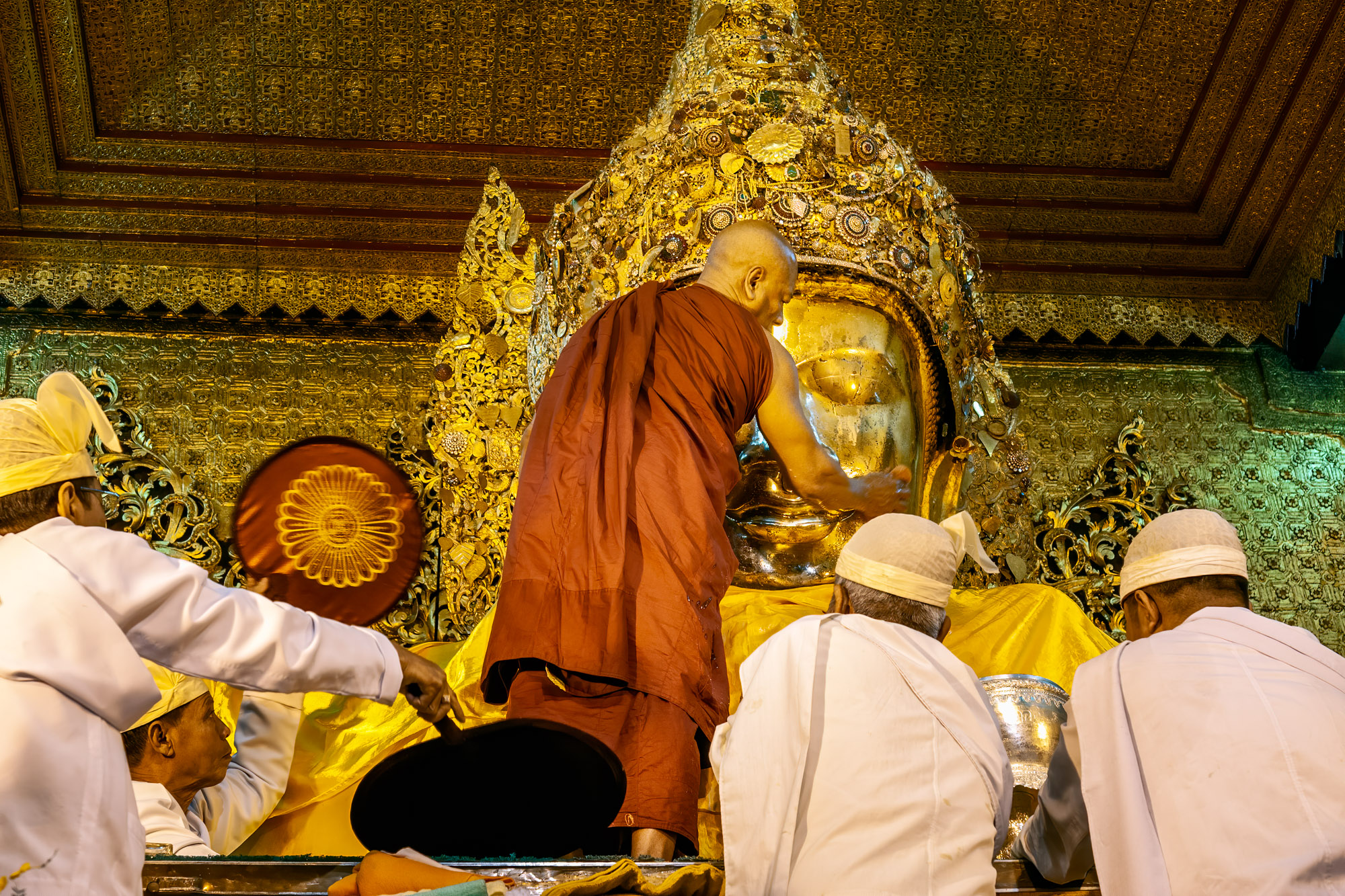 An unusual Buddhist ritual in Mandalay

The Mahamuni Pagoda in Mandalay, Central Myanmar, offers an unusual cultural experience within the Buddhist World. The daily event is not a tourist attraction, but a solemn ceremony attended by local devotees and pilgrims. Feeling disoriented, waking in the night, my wife, Took and I set off at 3 am, driving through the pitch-black darkness of Mandalay’s suburbs. Our objective, to see, learn and photograph something culturally different. Also, for my Buddhist Thai wife, to pay her respects to this local Buddhist landmark.

Unusual Buddhist rituals and traditions in Southeast Asia have always fascinated me. The colours, the sounds of chanting monks, and the smells of incense. All of these form part of the mystique and beauty of the religion. However, I freely admit to understanding little about the meanings or reasons behind these Buddhist rituals. Myanmar adds another dimension with its versions of Buddhist traditions, combining local legends and superstitions. 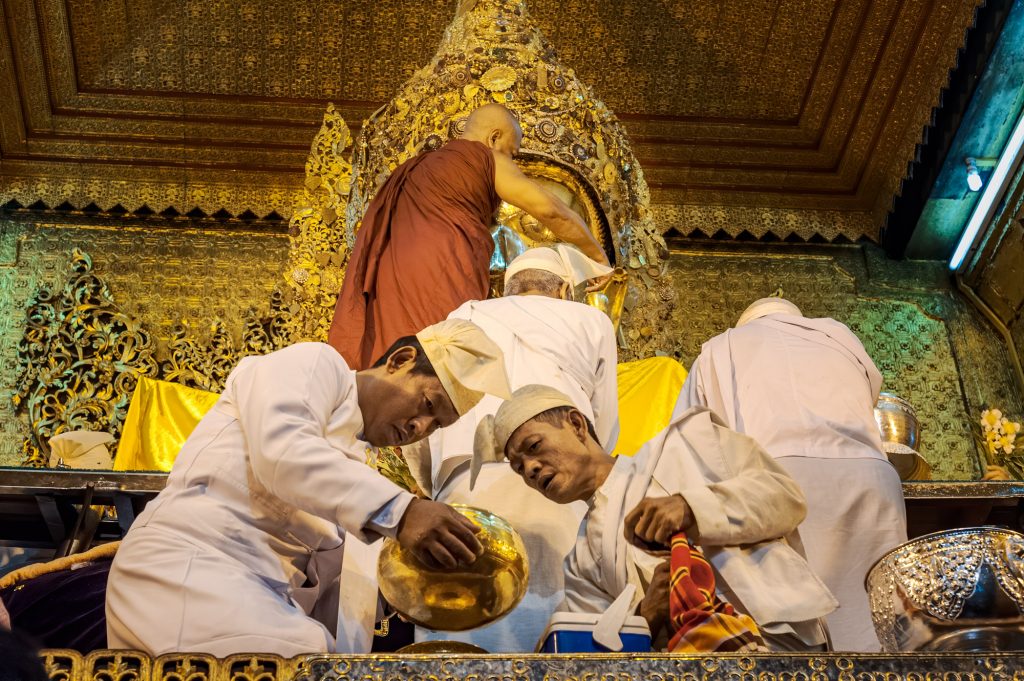 Every morning between 4am to 4.30 am, monks and devotees gather for the face washing and teeth cleaning of the Mahamuni Buddha image. The head monk dressed in monastic red robes leads the washing ritual with his assistants in white preparing the materials.

One such remarkable ritual is the Buddha’s daily face washing and teeth brushing at the Mahamuni Pagoda in Mandalay. It is unique and steeped in mythology. I have never seen a similar ritual elsewhere in the Buddhist world. The ceremony is not a tourist attraction and is a solemn religious ceremony for locals and pilgrims. There is a limiting factor in keeping crowd numbers low for casual visitors or tourists – the daily ceremony starts at around 4 am. However, foreign visitors are welcome at the pagoda if they can make the early-hour effort. On my visit, I was allowed photographic access to the Buddha base close to the ceremony.

The origins of this Buddha image is reportedly from the ancient Arakan Kingdom. Arakan now forms part present-day Rakhine State, located several hundred kilometres north-west of Mandalay. The legend revolves around a visit by Lord Buddha and his entourage to the Arakan Kingdom. In honour of the auspicious occasion, the King and Queen ordered the people to craft an image in the Lord Buddha’s likeness. This golden Buddha became known as the Mahamuni Buddha. How or why it ended up in Mandalay, the reason is unclear. It’s a mythology, legend, and superstition unique to this place.

The gold Buddha image is unusual, bearing distinctive teeth. It is a face on a sizeable gold-plated plinth above the worshipping gallery. On our arrival, many worshippers were already chanting in prayer and meditation. For Burmese people, the day starts early, long before sunrise and the day’s tropical heat and humidity.

After waiting a while, we noticed movement and flurried activity. The head monk, dressed in orange-red monastic robes taking the procession lead. Assistant monks and devotees, dressed in white robes and caps follow. The assistant monks arrange flowers around the Buddha and silver plated bowls containing water, sandalwood paste and other cleaning materials. 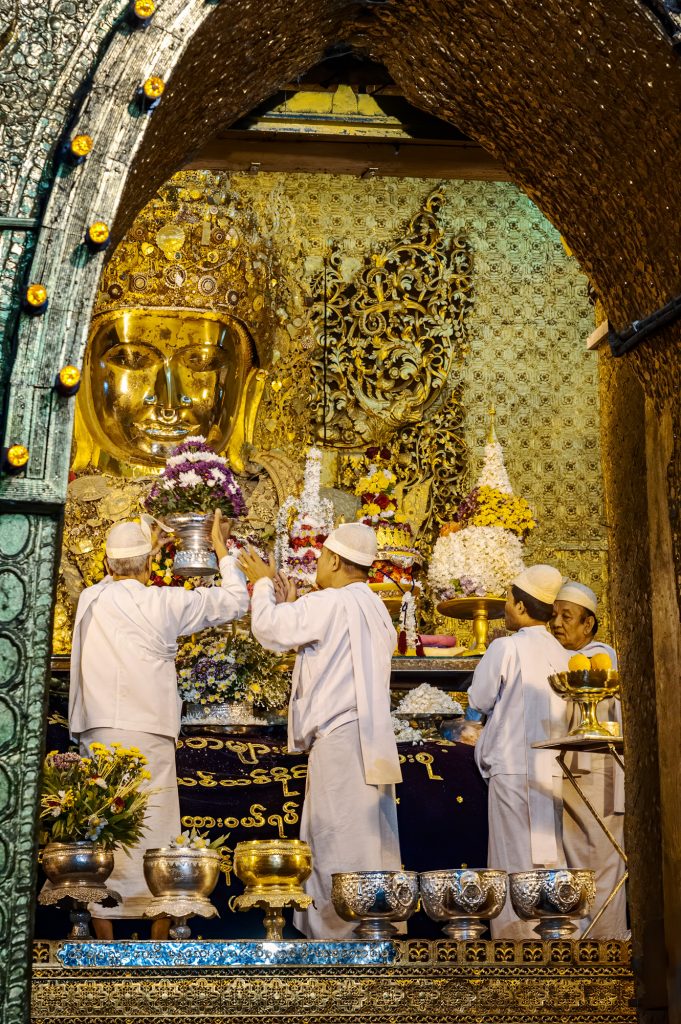 After a round of face washing, monks use use new, fresh clean towels to dry the Mahamuni Buddha’s face.

The ceremony duration is short, around thirty to forty minutes in duration, with monks departing as quickly as they arrived. After the ceremony concludes, the monks permit devotees to take the towels home as keepsakes and religious mementoes.

Following the monks’ departure at around 4.45 am worshippers, come forward and rub gold leaf around the image’s base. This gold-leaf rubbing ritual continues for the rest of the day as visitors come and go to the pagoda. Over the years, generations of worshippers have rubbed countless gold leaf layers to the image’s base. The result is a distinctly bulbous appearance and texture to the base Buddha image. 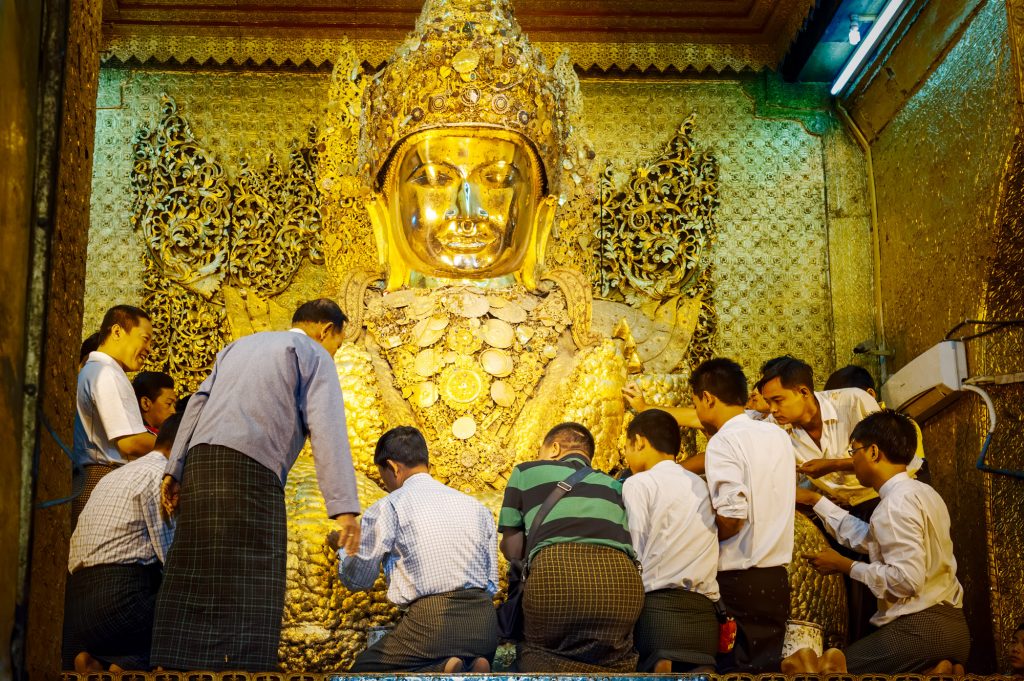 After the early morning Buddha face washing ceremony, pilgims and devotees gather around the Mahamuni Buddha and apply gold leaf to the base of the image.

Hoping for reasons and meanings behind this ceremony and ritual, I asked my Thai Buddhist wife, Took, some pertinent questions:

What is the reason for the early morning face washing and teeth brushing practice of this particular toothy, golden Buddha image? And,

What is the true Buddhist meaning of the ritual?

My wife, with a dismissive shrug of her shoulders, responded – “Don’t you wash your face and brush your teeth every morning?”.

Maybe it is that simple!